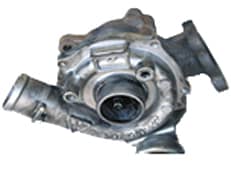 Turbo chargers can significantly increase the ratio of power to weight of an engine and explosively increase the power of which your engine kicks out. This is called a “forced induction system” and typically works by compressing the air flowing into the engine. The advantage of this that by compressing the air, you are allowing more air to pass through at any given time and thus by doing so, allowing the engine to mix in more fuel to match the air/fuel ratio
and in turn, kick out more power from each cylinder explosion!

In order to achieve the tremendous power from a turbo charger, it uses the engines exhaust flow to spin the turbine of the turbo charger. The turbine in the turbocharger spins at speeds of up to 150,000 rotations per minute (rpm) and that’s about 30 times faster than most car engines can go.

Turbocharger failure is usually caused by oil or air filtration/contamination problems. Please check your engine is in good condition before fitting an exchanged/repaired turbocharger.

All the problems listed above are common with turbocharger failures and we are able to remanufacture all units with the above problems. If your problem isn’t listed, we may still be able to help you and it’s always worth giving us a call before looking for a new unit as we can potentially save you £1000’s!

At Power Steering Services we stock a vast selection of car turbo upgrades and spares including the latest models and components in the Garrett turbo range which are capable of producing some serious horsepower when put to the test. As well being able to carry out car turbo upgrades using new units we also supply remanufactured turbo parts which have been rebuilt from the ground up and offer the same level of high performance that you’d expect from their brand new counterparts.